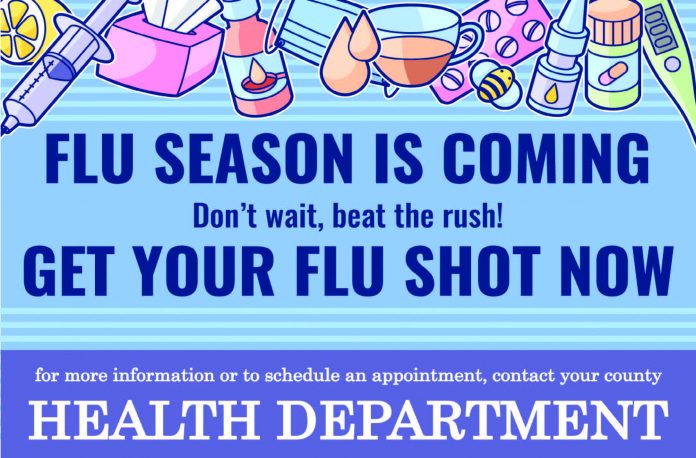 Time to get your flu shot

The flu is already starting to show up in emergency rooms and hospitals throughout Georgia so now is the time to take preventative action. Everyone six months and older should get vaccinated by the end of October. It takes about two weeks after receiving the vaccine for your body to fully respond and for you to be protected, says Dr. Robert Sinyard, chief medical officer for Piedmont Athens Regional hospital. Get your shot at your doctor’s office or at many local pharmacies.

Anticholinergics drugs can cause memory loss

Since the mid-2000s, several studies have noted an association between the drugs and a heightened risk of dementia. Among the prescription medicines are antidepressants such as imipramine, antihistamines such as hydroxyzine, antipsychotics such as clozapine, antispasmodics such as dicyclomine and drugs for urinary incontinence such as tolterodine.

Over the counter drugs such as Benadryl, Chlor-trimeton and sleep aids such Tylenol PM, Aleve PM and Nytol are also anticholinergics.

Unfortunately, physicians often attribute these drug-related symptoms to age-related illness rather than to the effect of the drugs, according to a research review by physicians at the Medical University of South Carolina and in Britain. Two new studies, funded by the National Institute of Medicine, will try to determine how best to wean older adults off these drugs and whether doing so might improve cognition or prevent dementia. For now, the advice is for people taking these drugs to discuss the issue with their primary care doctor to weigh the benefits versus the risks. Above all don’t stop cold turkey and don’t assume that if a drug is over the counter, that it’s safe for your brain.

Enhancing health and well-being for men in retirement

The OLLI@UGA WiseMEN Share Interest Group consists of several small groups, typically around eight men, who meet every two weeks to discuss common issues and challenges faced by men in retirement, who can find themselves socially isolated. Topics can range from casual to serious. Confidentiality is standard practice. For more information, contact Peter Balsamo at pb9665@gmail.com.

Nearly half of those who have a heart attack don’t realize it at the time. These so-called silent myocardial infarctions (SMI) are diagnosed after the event, according to the Harvard health Letter. Non-classic symptoms include fatigue, shortness of breath, dizziness, heartburn, sweating. They strike men more than women and can be so mild or mistaken for a less serious problem that men will ignore them. Those have an SMI and don’t get treatment have a three times greater risk of dying from coronary artery disease.

120 minutes of nature a week

It’s long been known that spending time outdoors is good for you but no one knew how long or frequently would provide the greatest benefit. Now a paper in Scientific Reports says that 120 minutes each week is optimal. The study examined data from nearly 20,000 people in England who took part in a survey from 2014 to 2016. Two hours was the magic number. Spending just 60 or 90 minutes in nature did not have as significant an effect and five hours a week offered no additional health benefits. Doctors in countries as diverse as Scotland, Korea, and Sweden are writing scripts for outdoor activities as a routine part of patient care. It’s low cost and low risk.