The Better Death
I was recently honored to be asked to address the graduates of the Certificate program at the UGA Institute of Gerontology, part of the College of Public Health. They are graduate students who must complete 18 credit hours in public health, and the social, psychological and biological aspects of aging.

An old photograph of my grandmother inspired me, and I thought it might be instructive for them to hear about Nanny’s last years contrasted with my Mother’s.

When I knew her in the 1950s, Mary Hatton Young was already in her late 70s, having been born in 1874. She had been a young widow with two daughters, living out in the country around the small railroad town of Hazlehurst, Ga. But the country couldn’t have been that far out then because she never had a car and walked to the First Methodist Church every Sunday for most of her life. I still remember her black old lady dress shoes.

She had no modern conveniences. She chopped the wood for her stove, and that’s also where the hot water came from too. She only had a well with cold water from a back porch spigot. I don’t know how she made money except perhaps from the sale of pecans she gathered from several big trees in the yard, and corn from a small field, no doubt assisted by nearby black sharecroppers.

She wouldn’t have needed much from a store. She raised chickens, gathered their eggs, fed them, wrung their necks for a Sunday dinner, and fried them in fat. She grew vegetables and had a fruit tree or two. She baked great cakes.

Clearly, she got plenty of exercise just going about her daily life, including what seemed to me like a very long trek to the outhouse. In 1959, her neighbors found her in the yard, felled by a stroke. She was 84.

She came to live with us. My mother quit her job, not career, to take care of her. She lived for two years more, mostly in the front bedroom. I came and went, an oblivious pre-teen but my younger sister had a special relationship with her, and to this day, thinks of Nanny as her guardian angel. She died peacefully in her sleep, probably from pneumonia. She never went to the hospital after that first time.

Fast forward, and my mother lived her married life in a town in a small house, with indoor plumbing, and a small yard. She got our food from the grocery store and drove there. Unfortunately, the food by the 1950s and ‘60s was more processed but she continued to cook it in the old Southern way, deep fat fried, and flavored with fatback. She loved her desserts. While Nanny dipped snuff, Mother smoked, although she did manage to quit sometime in the late ‘60s after the health warnings were mandated. The benefits of exercise and a healthy diet were not well known so, with a sedentary job and TV, she gained weight, got high blood pressure, and worse, became a Type 2 diabetic. By the late ‘70s, she had angina and by 1982, had a mild heart attack. In 1984, her doctor advised heart surgery but what we didn’t know, and doctors didn’t either, was that women didn’t have as good an outcome from the surgery. With smaller arteries and veins, it’s easier for plaque to break off and cause a stroke in the operating room – and that’s what happened. It all spiraled out of control.

Most troubling was the double vision, so no more reading (her lifeline); depression, common after stroke; and a medication that caused her white blood cell count to plummet, landing her in the isolation ward, which can cause psychosis. They gave her thorazine to manage it; she was 72. There followed eight years of medical interventions, nursing homes, rehab, and attempts to live at home with the help of private pay aides. None of us children could quit our jobs or have both parents live with us. It was a disaster.

The doctors and healthcare professionals meant well. But there were too many gaps in care, too many medical unknowns, and a family caught in the middle. In retrospect, it was really the early years of modern medicine, and the early years of the modern economy.

Forty years later, we all know a lot more – both health care professionals and consumers alike. The medical advances are incredible. We know how important diet and exercise are. But are our systems, be they health care, home care, family, employers, governments, or communities, prepared for the coming crush of aging Boomers. Many of us are skeptical, and all I know to do is continue to eat right, exercise moderately, educate myself, and advocate for myself. Beyond that, it’s fingers crossed, and Godspeed to the gerontologists! 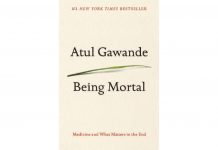 Just a thought. Of caregiving, book clubs, and mortality